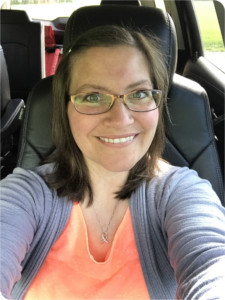 Andrea Cross is the Office Manager for Chase Custom Homes and also manages properties for Dave Keller Properties. This year, she and her husband will be celebrating their 15th wedding anniversary, but 20 years together! They have 5 children ranging from 20 all the way down to 4 as well as a grandson. Below, she tells her story and how she was impacted by LIVESTRONG® at the YMCA…

“In November 2016 while breastfeeding my then almost two year old, I found a lump in my breast. Just thinking it was mastitis or something associated with breastfeeding, I scheduled a doctor’s appointment. That appointment turned into needing a mammogram that turned into needing an ultrasound and then a biopsy. In December, I heard those three little words that would change my life forever, “It is cancer.”

“I was only 39 years old and honestly, never thought it could happen to me. I really thought cancer happened to older people. And ultimately thought of death when hearing about cancer. I didn’t want to die. I couldn’t die. I had little children that needed me.

“Those three words sent me into a whirlwind of doctors appointments, tests, scans, treatments, and surgeries. Because of my young age, genetic testing was done and I tested positive for the BRCA2 mutation which means I have a higher risk of certain types of cancer. I chose to have a bilateral mastectomy with reconstruction which mentally was the most difficult part of the cancer journey for me. Before surgery, I underwent chemotherapy for about 5 months. 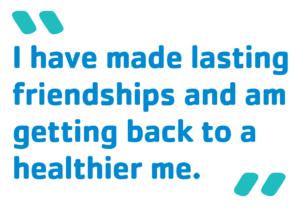 “Fast forward to January 2019…I signed up to participate in the LIVESTRONG program. Best decision I could have made. Prior to the class, I was having a hard time with survivorship. Still fatigued from treatment and surgeries. Still emotional. The class was exactly what I needed to get out of the rut I was in.

“I can’t stress enough how much this program helped me through some major struggles I was having with survivorship. The instructors were amazing. My classmates were exactly the people I needed to come into my life. I have made lasting friendships and am getting back to a healthier me. I can now run out to the mailbox to get the mail and run back and not be winded. I couldn’t have done that without this program. It was just the motivator I needed. It made such an impact on me that I am even contemplating becoming an instructor for the program!“