Tammerrie struggled with body image through both her childhood and early adulthood. She grew up with three sisters, none of whom had the same issue. Her parents knew Tammerrie was in pain, but didn’t know how to help. Feelings of loneliness and shame characterized her childhood and became all too familiar.

“By the time I reached 5th grade I was considered morbidly obese at almost 200 pounds,” recalls Tammerrie.

Mean words and harsh teasing clung to her like thorny branches, dragging her down. She tried participating in sports and longed to belong to a team, but she struggled with ill-fitting uniforms and unfriendly teammates. She became so discouraged by the 9th grade that she quit trying sports altogether.

“I was truly a very unhappy person,” Tammerrie remembers. “I hated the way I looked. I didn’t like my picture being taken. I didn’t like going out to eat.” 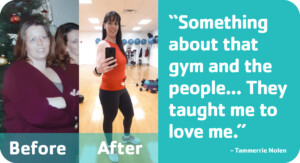 The pain of her childhood continued to define her path into adulthood. She grew up, got married and had a family of her own, but still didn’t feel she could fully enjoy life. Tammerrie had summoned the courage to go to the Y and work out a couple times on her own. Lacking direction, full of shame and without support, she lost the motivation to return and simultaneously got diagnosed with a medical condition resulting from her weight. Every visit to the doctor’s office brought new pangs of shame and hopelessness.

One day, one of Tammerrie’s children asked a question that hit a nerve. “Mommy, why don’t we ever take any pictures together?” This question hit her hard. She was tired of letting shame and pain prevent her from living her life and being with her kids. Tammerrie decided in that moment she was done missing out on life. She had spent most of her life ashamed and afraid of the mirror. She mustered up the strength to cast off the negativity and try again.

“I lived too much of my life feeling hopeless, feeling ugly, body-shamed and hating that lady in the mirror,” says Tammerrie. “It was time for a change.” 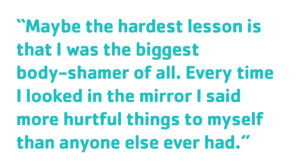 At 35 years old, with newfound strength and motivation, Tammerrie began making changes. She counted calories, changed her lifestyle in regards to eating and she stuck with it. She lost a lot of weight very quickly and was very happy with her success.

After losing a significant amount of weight, Tammerrie reached a plateau. Dieting and eating right alone could not sustain her weight loss. She knew she needed to exercise, however, she was still terrified. Even with this new weight loss, the gym had been a place filled with shame and fear. To cross the threshold back into the Y took a vast amount of courage. This time, Tammerrie came armed with a friend and her daughters and they joined a group exercise class.

Tammerrie was surprised by how much she enjoyed the class. She continued going and got to know her fellow classmates and instructor. She began to feel that she belonged!

“Something about that gym and the people… they taught me to love me.”

“I learned from my fitness family that I was more than a number on the scale and that exercise is a celebration of what my body can do, not a punishment for what I ate.” 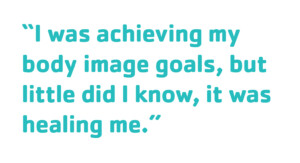 Tammerrie enjoyed sharing challenges and successes with her classmates and, without being aware of her progress, slowly became comfortable visiting the gym!

“The class I attended grew tremendously and so did my social circle and later my confidence. Once I was the shy lady in my own little corner trying to be invisible to the lady that was welcoming the new people. I belonged to a group, we were a family. The community feeling was priceless.”

Tammerrie has a message for people currently suffering with shame and body image: “You are more than a number; happiness doesn’t come from a poster image body. Your body is a personal, handmade gift from God. There is no duplicate. Love it. Your body shows up for you nonstop. It shows up at every workout, it shows up when you haven’t had much sleep, when you’re sick and it will move faster than imaginable in emergencies, mine carried years of obesity, it performs under constant self-doubt and ugly criticism. Your body can do anything; it’s your mind that needs convinced.”

“I’m so thankful I joined the Y and met the people I did. I would still be struggling with my body image and if it hadn’t been for my Y family. That helped me find me. I’m at peace with me, I love me.”

She plans to continue teaching until she can no longer breathe. She is thankful for her journey so that she can help others who are feeling stuck. The Y offers many different opportunities to embark on your wellness journey, achieve goals, make new friends and find yourself along the way.